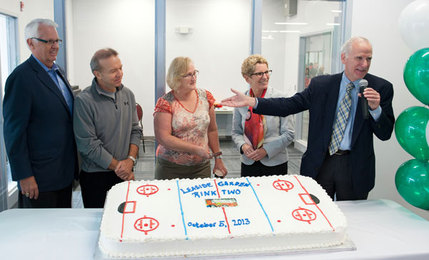 THEY KICK STARTED IT ALL: Peter and Cathy Clark donated $1 million in 2010 to help build a second ice rink at Leaside Memorial Community Gardens. On hand for the cake cutting are Don Valley West MP John Carmichael, left, and Ontario Premier Kathleen Wynne and Councillor John Parker, at right.
The Leaside couple whose anonymous $1 million donation in 2010 kick started the fundraising campaign for the Leaside Memorial Community Gardens’ second rink has come forward for the first time.Peter and Cathy Clark were on-hand Oct. 5 with about 500 other people when they were thanked by Arena Expansion Committee chair Paul Mercer during the opening ceremonies for the new rink.

“They took a risk when none of this was guaranteed,” said Mercer, “because they believe that sport plays a key role in the health and well-being of young people.”

After years of planning and private fundraising, the much needed ice surface in Toronto will be available for hockey and figure skating as of this weekend. Mark McAllister reports. Global Toronto